One of my greatest fears with regard to transitioning to a vegan diet is ... well ... eating shitty baked goods. (The other big one is living without cheese, but I'll deal with that later.) I love to bake and I love to eat all things baked. Ever since I started thinking about becoming vegan, I've been concerned about how I'm going to bake. No butter? No eggs? No dairy? No way are baked goods going to taste like anything other than flavored cardboard. Right?

Wrong!
Thank :::insert deity or other praise-worthy entity here:::, I'm wrong! Granted, I've only given it one shot, but this one baking success has lit the fire in my bake-lusty ovens again. 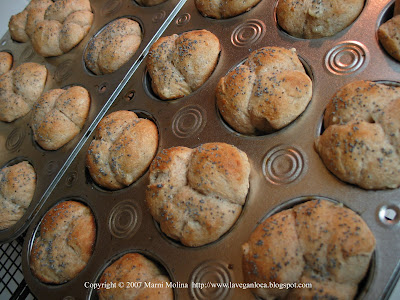 I'm not going to post the recipe because, well it's l-o-n-g for one and secondly, I really want you to buy this cookbook. It's ... it's ... it's the freakin' Veganomicon! It lives up to the name, fo' sho'. Just look at this baked deliciousness! 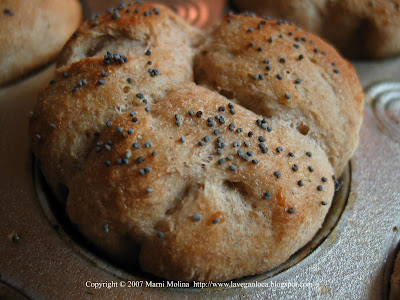 I followed the recipe as written and they came out perfect. There was a bit of leeway as far as what type of flour to use. I chose 3 cups whole wheat and 2 cups unbleached. I then used additional unbleached flour to knead the dough. These rolls are hearty and were a perfect compliment to the Minestrone Soup I served them with (recipe soon to follow). We slathered them with Organic Whipped Earth Balance and licked our fingers in approval. My husband ate five of them before I could get them put away after dinner! Even my 3-year-old son liked them, and he's one of those ultra-picky eaters.