So, last week's episode of Top Chef was quite exciting.  First, the elimination challenge was hefty: they had to cook Thanksgiving dinner for the Foo Fighters and their entire road crew without a kitchen!  They we outside without a fridge, freezer, or stove in sight.  They had only microwaves and toaster ovens to work with and in the middle of it all, they got rained on.  It was a serious challenge.
But something even more amazing than that happened: the dish that nearly everyone went bananas over was a vegan stuffing!  Hooray!  I just get excited whenever I even hear the word vegan on TV, but to see a bunch of foodies get psyched about vegan food is very cool.
Now, the recipe was originally published on the Bravo website with a typo which which made it appear as though it's not truly vegan.  However, it has since been fixed and I'm really looking forward to trying it.  So without further rambling, I give you....
Radhika Desai's Roasted Veggie Vegan Cornbread Stuffing 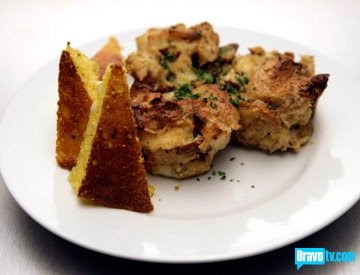 If you want to watch the episode, you can do so here.
Here's to more vegan yummies on Top Chef!

soo... i really can't stand radhika, but also thought it was totally awesome that the vegan stuffing was loved by all!

How awesome that a vegan recipe was the hit! YAY!

I was so happy to see that the vegan stuffing was one of the runaway hits on that episode! Win one for veganism! :)

Allularpunk: LOL She's not my fav this season, but I wouldn't say I can't stand her. There are certainly others that squick me more.

Hannah: Me too. I'm happy to see veganism "normalizing," though I'm not sure it'll ever be "the norm." But things like this give me hope.

Jeni Treehugger: I agree. Sounds like a smart shortcut to me.

that is really cool. Love it when vegan dishes get rave reviews, too ;)

Those are fresh herbs, right? It wouldn't be 1 tablespoon of dried, correct?

I'm assuming so. I haven't made it myself, but if I were making it I'd got with fresh herbs if I had them or reduce the quantity if I were using dry herbs.